I love Marx, and I love Rousseau. I love political philosophy. But I sure am tired of writing papers about “man” and how “he” is alienated from “himself,” because it’s simply not appropriate to use “people” in combination with non-gendered pronouns for the entire paper and lord knows they never once refer to the effects of political ideology or the system’s organization on the female experience of the world.

There is no point to believing that one can strike or cut off an arm without pain being transmitted to the head. And it is no more believable that the general will would permit a member of the state, whoever he might be, to injure or destroy another member than that the fingers of a man in his right mind would put out his eyes. Individual welfare is so closely linked to the public confederation that, were it not for the fact that one must take account of human frailty, this convention would be dissolved by right if just one citizen within the state were to perish who could have been saved, if just one citizen were wrongly held in prison, and if a single court case were to be lost because of an obvious injustice. For when these fundamental conventions are violated, it is no longer apparent what right or what interest could maintain the populace in the social union, unless it is restrained by force alone, which brings about the dissolution of the civil state.

Word for word from Wikipedia,

“Cultural Hegemony describes the domination of a culturally diverse society by the ruling class, who manipulate the culture of the society – the beliefs, explanations, perceptions, values, and mores – so that their ruling-class worldview becomes the worldview that is imposed and accepted as the cultural norm; as the universally valid dominant ideology that justifies the social, political, and economic status quo as natural, inevitable, perpetual and beneficial for everyone, rather than as artificial social constructs that benefit only the ruling class.”

This term is credited to Antonio Gramsci. 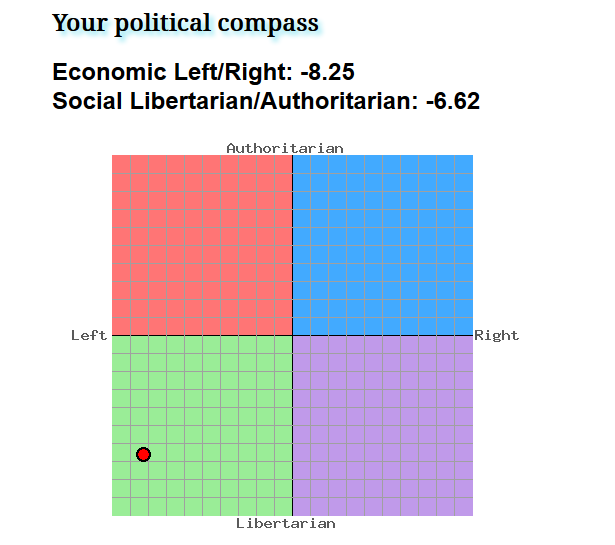 My political compass. This is worth knowing, because anything that anybody writes, says or believes comes with a personalized slant. It is important to know the source of the things you are exposed to.

For the same purpose, it is worth knowing yourself as well.

Art to make you think.

I’ve settled on a dream in life. It’s a small one (ha ha ha), but I think it will change things in a really big, beautiful way for me. It’s something I’ve been thinking about for about a year now, and as it stands now it’s what I want in my future more than anything else. I want to build a home, with my own hands (and the help of others, because I’m sure I can’t do it alone). And I want it to be tiny, minimal, and all that I really need.

This is definitely a little bit of my father in me, who also has a bit of the “Tiny House” mentality in him, though he does it a little differently.

There are people behind the public facade, behind addictions and prostitution and chronic poverty. Please really look at the images, and read the descriptions in full. It was the most moving thing I did today.

It is better to be kind than to be right.

People on social assistance are some of the most impoverished in our country. Punitive policies attempt to coerce people on assistance to “get a job” by setting assistance rates at lower dollar amounts than full-time work in a minimum-wage job would pay. Which, coincidentally, it itself insufficient to afford the cost of living in Canada.
There are human lives at the core of social policies. There are human beings sleeping on the streets. Educate yourself.

“Reverse Racism” which is, by the way, not a thing. Educate yourself.